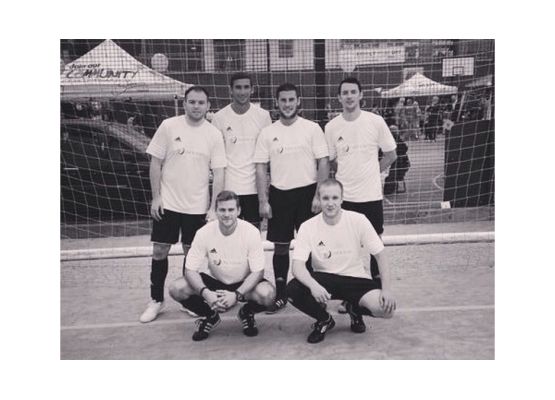 Ductclean made a dream start to their venture into the footballing world with a convincing victory at the Peckham Pride Fun Day.

The Peckham Pride Fun Day is an annual charity event, organised by A&E Eilkins Limited, a large maintenance, refurbishment and roofing contractor based in the Southwark area. Each year, A&E Eilkins invite local residents, clients and other contractors to take part in activities on the day, with the hope of raising as much money for charity as possible, and took place on Friday 15th August, at the City of London Academy, Bermondsey. This year, all monies raised would be spread across good causes in Southwark, and a large portion of the proceeds would be donated to The Freddie Farmer Foundation; a charity formed in 2011 to help raise funds needed to set up and run a specialised physiotherapy centre in South-East London for children and young adults with cerebral palsy and other serious mobility problems.

This year the main event was a 5-a-side football tournament, involving 12 teams, all entered from various contractors from different backgrounds within the building industry. Ductclean (UK) Ltd sent a team of 6 volunteers to go and represent us on the day, obviously the taking part was the most important thing, as the whole day was in aid of charity, although the lads were quietly confident with their chances of winning, however the opening game did not go to plan. A series of refereeing mistakes, and disputes about the tournament rules saw Ductclean unfairly disallowed a perfectly good goal, and also have a penalty awarded against them. After going 1-0 down via a penalty, Ductclean managed to score an equaliser and grab a draw. This result obviously didn’t go down well with the lads, and inspired them to improve their performances. Ductclean took no prisoners and sailed through the final unbeaten, winning their final 3 group games, and semi-final with ease. The final saw Ductclean come up against a youthful team of scaffolders, whose performances in previous matches promised a tough opposition and difficult game for Ductclean. Ductclean started well, keeping the ball with ease, Ductclean had quite clearly worked out a better game plan than the opposition, passing and moving the ball quickly, making the opposition do all the running, before long it was easy to see the opposition were tiring, and Ductclean triumphed with a convincing 2-0 victory, without our goalkeeper making a save.

A presentation after the final saw Ductclean (UK) Ltd presented with an impressive trophy by Freddie Farmer himself, the inspiration behind The Freddie Farmer Foundation. Freddie was born at 28 weeks, with cerebral palsy, and only weighing just 2lb 12oz. Freddie and his family have to travel to Oxford three times a year, for three weeks at a time so Freddie can receive unique and specialist Physiotherapy. The Freddie Farmer Foundation was formed to help raise funds for a specialist physiotherapy centre to be built in London, which would allow for not only Freddie to receive treatment closer to home, but would allow for all the other children and young adults in and around London, who also suffer with cerebral palsy to benefit from a treatment centre more locally. For more details and to donate please go to: http://www.freddiefarmerfoundation.org.uk/

The Peckham Pride Fun Day was an extremely enjoyable occasion, and we hope it was a great success for a great cause.

Congratulations to the lads who made up the winning team on the day. The team consisted of; James Wren, Gary Whayling, Mark Blackburne, Peter Falco, Paul Sheppard and Rory Bone