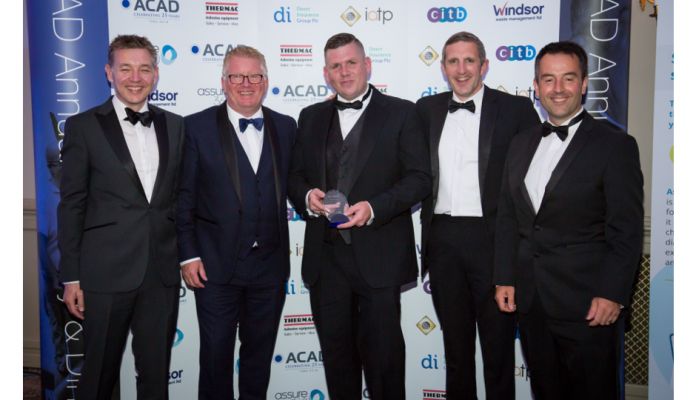 Following the ACAD 25th anniversary awards on the 7th July 2018, at Oulton Hall, Leeds, we are pleased to announce that DCUK FM won both the ‘Excellence in Audit’ and ‘Leading Best Practice’ awards.

The ‘’Excellence in Audit’ award goes to organisations which achieve over 98% score during an ACAD audit.

The ‘Leading Best Practice’ award goes to the organisation which exceed the legal requirements and display the most aspirational standards in their work.

Both audits and awards were conducted by ACAD at the British Land, Castle View, Lancaster site, which was managed by Mark Stottor and supervised by Gareth Wood. Members of the site team were invited to the awards as appreciation of their efforts throughout this challenging project.

“The project at Castleview presented various challenges which included working on listed buildings, which makes this award even more valued. It is always satisfying to receive recognition from our peers for the services that we deliver. We could not have achieved this award without the support of our supply chain, including SMH Products, Ecoblast and Lucion. We would also like to thank ACAD for their continuous dedication in raising industry standards, which should be recognised.”